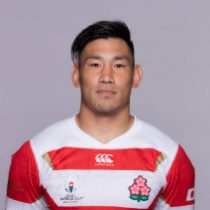 Ryoto was born in Kagoshima and schooled at Kagoshima Jitsugyo High School. He later attended Teikyo University before beginning a career in rugby.

Nakamura has played all of his senior club rugby in Japan with Suntory Sungoliath, which he joined in 2014.

He made his senior debut for Japan in a match against UAE on May 10, 2013 and has made over 23 appearances for the Brave Blossoms as they head into the quarter finals of the Rugby World Cup.