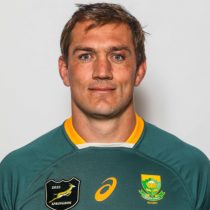 Comfortable at blindside flank or lock, Elstadt played his school rugby in the Boland before moving to Western Province set-up.

Selected for the South African U20s in 2009, Ryhnardt went on to make his senior debut for the Vodacom and Currie Cup teams in 2010 before his Super Rugby debut in 2011.

His no-nonsense approach with ball in hand and on defence makes him an invaluable player to the Franchise.

In October 2014, he was part of the Western Province team who won the Currie Cup by beating the Lions 19-16.

Elstadt enters the 2017 season having made 52 Super Rugby appearances since his debut in 2011.

In September 2017, Toulouse signed Elstadt as a medical joker following a spate of injuries to the second-row and went on to sign a permanent contract with the side. He has played 59 times for the Stormers in Super Rugby.

Elstadt enjoyed an outstanding start to his career in Europe making 34 appearances in his first two seasons in the Top14 and featured in all 8 of Toulouse's games as they reached the Champions Cup semi-finals.

His form with Toulouse earned him a call up to the Springbok squad for the 2019 Rugby Championship and became just the second overseas-based player to make his Springbok test debut while based abroad.

With his performance, he was selected in the list of Springboks to prepare for the Cup of the World 2019 in Japan.

In the absence of the internationals, he was confirmed as Toulouse captain in late 2019.