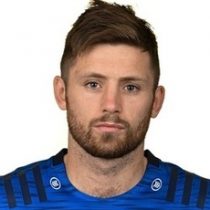 He was a member of the Leinster Academy, with experience playing at both Leinster & Ireland U20 level.

In 2015 he was drafted into the Pro 12 Squad, whilst still a member of the Academy.

At 21, Byrne was another prosperous up-and-comer within the Leinster setup, with plenty of competition ahead of him in the shape of Johnny Sexton.

Byrne was added to the Leinster Champion's Cup squad for the 2016/17 campaign. With a depleted stock at out-half, Byrne showed his talent with some positive performances in the 10 shirt. A strong kicking game and accuracy off the tee being his core strengths.

Following a great season with Leinster, the former St Michaels's College scholar earned a national call-up ahead of the 2018 Ireland Tour to Australia.

He didn't make his debut against Australia and entered the 2018/19 season with 49 caps and 228 points for Leinster.

With just 2 appearances to his name, in May 2019 Byrne was selected in the Ireland RWC Training Squad.

Byrne was named for the 2020 Six Nations Ireland squad with 3 caps.