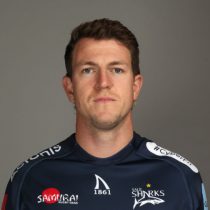 James spent the summer of 2012 with team-mate Nathan Fowles in South Africa, taking part in the Under-21 Currie Cup for Border Bulldogs.

Able to play either in the centre or at fly-half, he achieved his first taste of a first-team match-day experience after being named as a replacement for the LV= Cup game against Saracens in March 2013.

Formerly a Senior Colt at Manchester Rugby Club, he played for England Under-19s while studying at Wilmslow High School while only 17 years of age.

James made his Premiership debut for Sale Sharks back in 2014 against Northampton Saints, scoring seven tries in 24 appearances.

In August 2016, James extended his contract at Sale Sharks by four years, and a year later he became one of 15 uncapped players to be named in England's 31-man squad for their two-Test tour to Argentina in June 2017.

In March 2020, James scored two tries against London Irish, helping Steve Diamond’s side to a 39-0 victory that consolidated second place in the Premiership table.