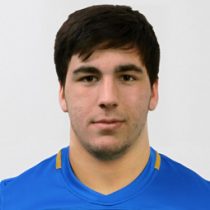 Iachizzi is an Italian born lock who grew up in a rugby mad household with his four brothers and sister.
Having made some quality performances for his youthclub Lazio and later USAP Perpignan, Iachizzi was selected in the Italy U18 squad in 2016.
A year later he was named in the under-20 Italy squad for the 2017 u/20 Six Nations.