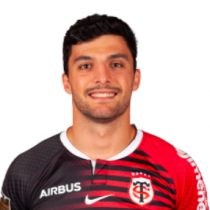 Fouyssac is a powerful winger that was spotted due to his pure size and technical ability. The young French winger weighs over 100kg and stands at 1.89 metres tall.

He made his Top 14 debut for Agen during the 2015/16 season and accumulated 11 games that season.

The powerful young center left Agen at the end of the 2017/18 season to join Toulouse.

Pierre remains an integral part of the Toulouse squad as he heads into the 2020-21 season.