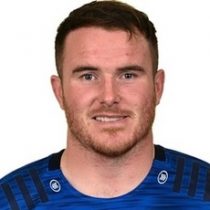 Dooley, an Offaly native & coached by his father throughout his underage career, broke in to the Leinster squad off the back of some very impressive rugby at club level for Lansdowne RFC.

Dooley had lined out at number eight for most of his teenage years but, aged 18, was nudged towards the front of the scrum.

With the help of current Lansdowne coach Mike Ruddock, Dooley won an Ulster Bank League Division 1A title under the Welshman’s tutelage and previously reached the semi-final of the Under-20 World Championship in New Zealand.

The hugely physical loosehead prop has represented Leinster & Ireland at U18 & U20's level, before earning a place in the Leinster Academy.

Dooley's reputation continues to grow within Leinster but he faces the unenviable task of trying to dislodge Ireland international's Jack McGrath and Cian Healy.

He heads into the 2019 Champions Cup with 3 appearances in the tournament.