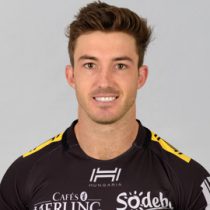 A schoolboy star at Grey College, Jordaan’s career took a major step in 2012 when he formed part of the victorious Baby Bok team and forced his way into the Sharks starting line-up. A speedy outside centre with a devastating step, the former Sevens Springbok is one of the most exciting backline talents in South Africa.

On June 14th, 2016, the Sharks centre was announced to be leaving the club at the end of the 2016 Super Rugby season to join French club, La Rochelle on a three-year deal.