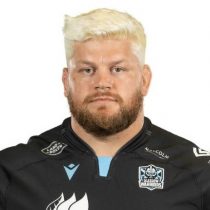 Educated at Bishops and Dalwich College, the prop returned to South Africa in 2012 and immediately linked up with the Western Province team. Able to play on both sides of the scrum, Kebble was selected for the Baby Boks who went on to win the 2012 IRB Junior World Championship in South Africa and had more success in 2013 when he won the U21 Currie Cup with Western Province.

Oli – the son of former Springbok prop, Guy, who played Test rugby in 1993/94 – impressed with ball in hand and at scrum-time, forming part of the formidable Stormers front row in 2015.

Kebble made his first Vodacom Super Rugby start in 2015 against the Toyota Cheeetahs, and with Steven Kitshoff having left Newlands he is in line to make many more in 2016.

He rose through the ranks and earned his Super Rugby debut in 2014, making a total of 34 appearances in the competition over three seasons.

Kebble agreed to join Glasgow Warriors on a two-year deal at the end of the 2017 Super Rugby season.

He has made an immediate impact in Glasgow and has made 39 appearances as pf December 2019. Kebble has extended his contract with the side until 2020.

In October 2020, Kebble earned his maiden test call up for Scotland having qualified via residency.