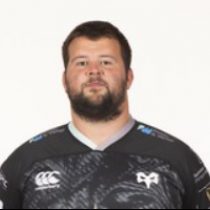 A mainstay of the Wales Under 20 squad, making 20 appearances, Thomas was in the starting line-up for the 2013 World Rugby Championship final loss to England.

He spent part of his formative years studying at Hartpury College as well as representing Ospreys, making five appearances and represented Aberavon and Swansea.

Thomas made 9 appearances for Gloucester but decided to return to Wales to pursue his international ambitions and inked a two-year deal with Scarlets in October 2016.

After eight appearances in his first season for Scarlets, the Swansea-born Thomas joined Bristol Rugby on short-term loan.

In December 2017, Thomas signed for Dragons until the end of January as injury cover.

In February 2021, he signed a short-term deal with Wasps.