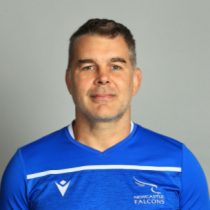 Making his International debut against Italy in the 2007 Six Nations, Easter spent a majority of his playing career at Harlequins where he represented the club 281 times over 12 years. The robust number 8 started his career at Orrell from 2001-2004. He became the first England No.8 to score four tries in a single match when he played against Wales in a World Cup warm-up in 2007.

Easter featured heavily in the 2007 and 2011 Rugby World Cups for England. His consistency and tough approach have made him a stalwart for both Harlequins and England, with the ability to play at either No.8 or blindside flank. His Great Grandfather, Pieter le Roux, played rugby for the Springboks

Due to his relentless domestic excellence, the 36 year old ended a three year International when he was named in Stuart Lancaster's 2015 Six Nations squad.

He represented England 54 times and Captained his country too. Following his retirement he took up a coaching role at Quins. 'Minty' as he is known took up the Defensive Coaching responsibilities.

Ahead of the 2018/19 Season, under new coach Paul Gustard, Easter left his role after 14 years at The Stoop