It was a full house of wins for the New Zealand Super Rugby Pacific teams this weekend while the Fijian Drua downed Moana Pasifika in their first match against one another.

Former Munster hooker Rhys Marshall came off the bench to set up and score a try as the Highlanders claimed a convincing 61-10 win over the Western Force.

Jeremey Thrush and Andrew Ready did grab tries for the visitors but the Highlanders were just far too powerful.

However, the Brumbies showed their championship credentials with a powerful second-half fightback to fall just 11 points short.

The first meeting of the Super Rugby Pacific's newest sides proved a high-scoring affair with the Fijians seeing off a fighting Pasifika 34-19.

The Drua were ahead inside five minutes when Kalaveti Ravouvou found a beautiful offload for Te Ahiwaru Cirikidaveta to cross. The Fijians extended their lead to 14-0 when Vinaya Habosi broke free and ran more than half the field to score.

Solomone Funaki peeled off the back of a maul and barged over for Pasifika's opening score. But the Fijians struck back late in the first half through Apisalome Vota.

Abraham Pole scored to cut the margin to 12 before the break. Pasifika started the second half brightly with Danny Toala finding winger Timoci Tavatavanawai with a cross kick to score.

The Drua iced the contest with a penalty before Vota doubled up for 34-19.

The Reds slumped to their fourth straight defeat to New Zealand opposition as they were on the wrong end of a Blues' trashing.

Beauden Barrett led the charge for the New Zealanders with the first-five directly involved in four of the Blues' eight tries assisting three and scoring one of his own.

Fullback Stephen Perofeta was just as influential scoring a try, 13 points from the tee, and assisted two tries.

Coming off the bench early for Rieko Ioane, Bryce Heem grabbed two tries with Caleb Clarke and hooker Soane Vikena scoring twice, the latter being on the pitch for just 16 minutes.

Reds' fullback Jock Campbell scored twice for the Reds with Suliasi Vunivalu and Ryan Smith dotting down for the visitors.

In the end the Blues were just too strong, particularly in the second half, as they surged to victory and cemented top spot on the log.

Ardie Savea was the man for the big moment again scoring a late try securing a 22-18 win over the Waratahs. The Waratahs led 15-0 at halftime and looked on course for the win until Savea's 75th minute winner.

NSW scored twice in the first half, the first through No.8 Rahboni Warren-Vosayaco came up with a try after picking up the ball at the back of the scrum. The second was a more impressive effort as Izaia Perese got away a freakish backhand flick pass for winger Dylan Pietsch to score in the 36th minute.

Chiefs prop Ollie Norris brushed off tackles to score a try in the 80th minute to down the Melbourne Rebels.

Reece Hodge edged the Rebels ahead with just under 10 minutes to play and it a four-point advantage in the 77th minute.

Melbourne led at the 47-minute mark after scoring two tries while they were a man down. Josh Ioane threw a loose pass that was toed ahead by Rebels winger Andrew Kellaway for a try with Rebels pivot Carter Gordon snapping up an intercepting an Ioane pass and dashed 80 metres to touch down.

Samisoni Taukei'aho nudged the Chiefs back ahead before the hour mark from a driving maul before centre Emoni Narawa danced through some traffic to open up a nine-point lead. The Rebels rallied but the late try meant they still came up short.

HOW THINGS STAND AFTER 13 ROUNDS OF SUPER RUGBY PACIFIC 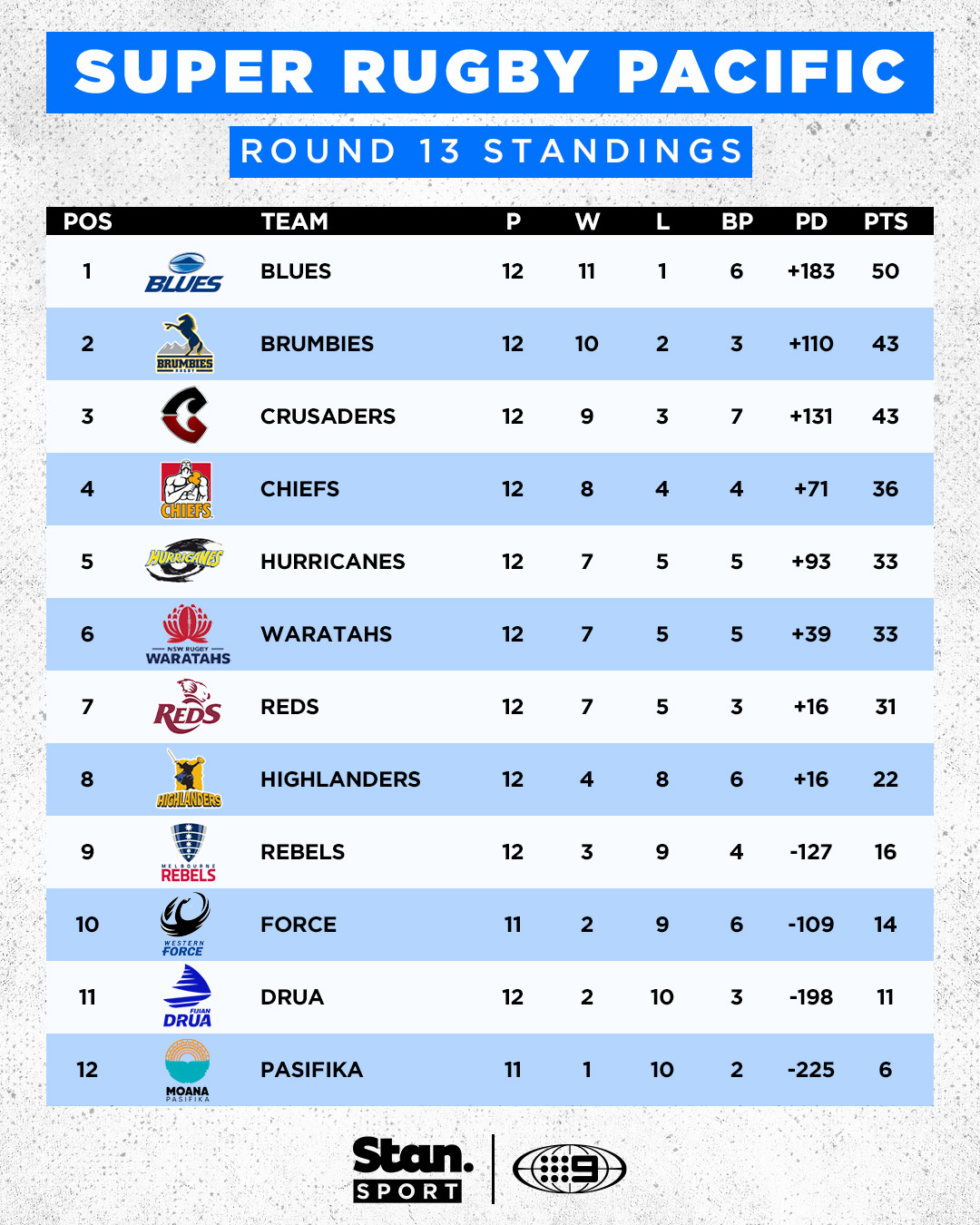