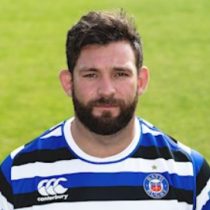 Born in Bristol, Catt was educated at Clevedon Community School before graduating and moving on to the City of Bath College. His professional rugby career began in 2008 when he was given a contract with Bath having impressed the previous year with England at the '07 IRB U19 World Championships.

Having made his debut for Bath in 2008 against Leicester Tigers, Catt progressed to the England Saxons side just a year later.

He was called up to the senior England squad by Eddie Jones in January 2017.

An athletic prop, Catt is not only strong at the set piece, but has the handling and carrying skills which make him a real threat in all aspects of the game. The loosehead has made over 150 appearances since his debut in 2008.

Catt was one of the standout performers for Bath Rugby during the 2016/17 campaign, which was rewarded with a call-up to the England elite training squad. That wasn't the end of his accolades, as he scooped Best Forward and Players' Player of the Year at the Bath Rugby Annual Awards Evening.

The experienced forward signed a new long-term contract at the end of 2018.