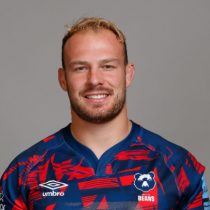 Son of former Bristol Rovers player Jim Eadie, No.8 Mitch nearly followed in his father’s footballing footsteps but developed a keen interest in the oval ball instead, and joined Bristol Rugby aged just 18.

Despite being born and bred in Bristol, Eadie qualified for Scotland Under-20s and played for the side between 2011 and 2013 having joined the Bristol Academy at the beginning of the 2011/12 season.

Making his debut for Bristol during the 2010/11 season, Eadie soon secured a regular position in the side and during his seven seasons there, scooped the Players’ Player of the Season award on two occasions and helped Bristol earn promotion from the Championship.

After making more than a century of appearances for the West Country outfit, Eadie made the switch to Northampton for the start of the 2017/18 season, earning his debut against Saracens in the season opener at Twickenham.

Eadie then scored his first points in Black, Green and Gold in the final game of that campaign as Saints downed Worcester Warriors at Franklin’s Gardens, before adding nine more appearances and three further tries to his tally in the 2018/19 season.

After making over 130 appearances between 2010 and 2017, he returns to Ashton Gate to link up with Pat Lam.