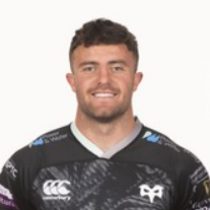 Luke Morgan came through the development pathway at the Ospreys and played one senior game for his home region as a teenager before linking up the national sevens side.

Morgan established himself as one of the deadliest attackers on the World Rugby Sevens circuit as he became Wales Sevens leading try scorer of all-time.

He also finished the 2017/18 World Rugby Sevens Series in second place overall for tries scored with 44.

In July he was named in the Wales squad for the Sevens World Cup in San Francisco.

Ahead of the tournament he signed a deal with Ospreys for the 2018/19 Pro14 season and linked up with the squad following the conclusion of the RWC7s.

In October 2018, Morgan was named as one of two uncapped players in the Wales squad for the November Internationals.

Morgan made his test debut during the 2018 November Internationals.

In March 2019, the Wales Sevens all-time top try - and points - scorer agreed to extend his time with the Ospreys until at least 2021

The year 2021 saw him pen a new contract extension with the Ospreys.