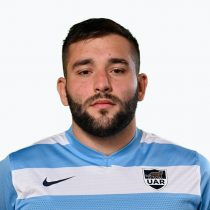 A promising front-row talent Lucio Sordoni is among the young pool of talented front rowers who have been tipped to help Los Pumas become a dominant scrummaging force in World Rugby once again.

Sordoni starred for the Argentina u20s in 2018, so much so that he was called into Mario Ledesma's squad for the November Internationals against Ireland, France and Scotland despite having yet to make his Super Rugby debut.

Sordoni made his test debut off the bench against Ireland and featured against France a week later and was an unused substitute against Scotland.

He was named in the Jaguares squad for the 2019 Super Rugby season and was named on the bench for the first time in round 12 against the Stormers.

Touted as one of Argentina’s best young front-rowers, Sordoni signed with the Melbourne Rebels having spent the past two seasons with the Jaguares Super Rugby team.

As of January 2021, he has three test caps to his name and four Super Rugby caps.

Ahead of the 2022/23 season, Sordoni joined Glasgow on a short-term deal.