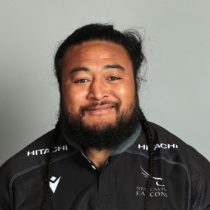 A charismatic front rower, Logovi'i Mulipola stormed onto the scene with Samoa who he made his test debut against Papua New Guinea in 2009.

Mulipola joined Leicester Tigers on trial in November 2011 after impressing for Samoa at the Rugby World Cup in New Zealand while also playing for Hawkes Bay in the NPC.

He made his Tigers debut as a replacement on 7 January 2012 against London Wasps in a Premiership game at Welford Road Stadium and in January 2012 he signed a contract until the end of the 2012 season.

Mulipola started the 2012 Anglo-Welsh Cup final as Leicester beat Northampton, he was used as a 73rd-minute replacement in the 2012 Premiership Final where Leicester lost to Harlequins.

He picked up a winners medal with Samoa at the Pacific Nations Cup in 2012. Mulipola was an instant hit with the Tigers fans, who have come to love all the characters in the popular front row.

Mulipola started the 2013 Premiership Final at loosehead for Leicester as they beat Northampton to become English champions. Making 98 Premiership appearances and a further 22 in the European Champions Cup during his six and a half seasons at Leicester, Mulipola won the Anglo-Welsh Cup in first year in the East Midlands in 2012, playing in the Aviva Premiership final that year and going on to win the Premiership title the following season.

Having been selected for Samoa to represent them in the 2015 RWC injury forced him out of the squad a week before kick-off. He was replaced by Census Johnston.

In April 2018, Leicester Tigers announced that Mulipola will be a Newcastle Falcons player after the destructive prop agreed on a deal to join the Kingston Park club.

During his time at Leicester, he made 100 Premiership appearances for the Tigers, for whom he played a further 22 times in Europe.

Establishing himself as a regular for the Falcons in his debut season, Mulipola's ability to play on both sides of the scrum proved one of his many assets.

Having featured for Samoa at the 2019 Rugby World Cup, Mulipola took his test cap tally to 33. In July 2020, he signed a short-term deal with Gloucester until the end of the 2019/20 season.

September 2020 saw Newcastle Falcons announce that the Samoan international will rejoin the squad.

In February 2021, he put pen to paper to be a Falcon for at least a further two seasons.