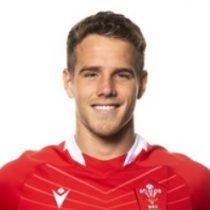 Hailing from Pontyberem Hardy developed through the age grade ranks at the region and was a member of the region’s Academy. He made his professional debut for the Scarlets against Northampton Saints in the Anglo-Welsh Cup campaign in November 2014.

He went onto represent Wales Under 20s in the 6 Nations and Junior World Cup in 2015, having previously played for his country at both Under-16 and Under-18 levels.

Ahead of the 2016/17 season, he made a move to English Championship side Jersey.

His performances for Jersey caught the eye of his former employers and in April 2018 Scarlets confirmed that Hardy would join the club ahead of the 2018/19 season.

In October 2020, Hardy became one of seven uncapped players named in Wales' 38-man squad for the 2020 autumn campaign.