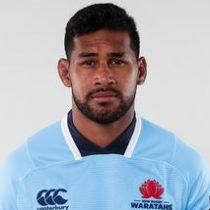 Kelly Meafua is well known for the physical ball carrying side to his game. He made his debut on the 7s circuit in 2014 when he featured in the Wellington and Las Vegas legs. He was a late replacement for the Japan and Honk Kong legs, called in to replace captain Reupena Levasa.

After joining the West Harbour Pirates in the Sydney Shute Shield and Greater Sydney Rams for the NRC, Kelly earned a contract with Narbonne in the French ProD2 for the 2015/16 season.