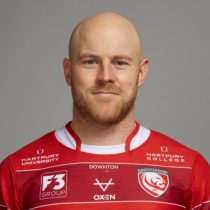 A graduate of London Wasps' academy, Simpson has fast developed into an electric scrumhalf with a snappy pass from the base.

In the 2008/09 season Simpson graduated to the Wasps first team, coming on as a substitute a number of times and gaining a more frequent position in the starting XV towards the latter part of the season. He scored on his debut and was awarded fourth place in the Guinness Premiership Try of the Season award.

Having played for England at Saxons level, he won his first full cap at the 2011 World Cup as a replacement, becoming only the second player to win his first cap for England in a Rugby World Cup tournament.

Joe has represented England at U19, Sevens and U20 level and in 2008 he was nominated for the IRB Young Player of the Year award.

The speedy scrum half spent last summer training with the Great Britain 7s squad in a bid to make it to the Rio Olympics, but missed out on the final squad due to an elbow injury.

He joined the Academy in the summer of 2006 and developed rapidly, making his senior debut in October 2008. After some eye-catching appearances off the bench and some top tries, he became first choice scrum half by the end of 2008/09 and was promoted to the First XV squad ahead of the 2009/10 season.

Simpson is also a full international, having represented England in Rugby World Cup 2011.

In the 2013/14 season, Simpson continued his impressive form at scrum half, battling it out with Charlie Davies for the number nine shirt. He made 28 appearances, taking his total to 133 and scored six tries.

In the 2014/15 season, Simpson played his 150th game for the club in a clash with Bath at the Rec. For his outstanding performances Simpson was named in the BT Sport Team of the year and also scooped the award for the Aviva Premiership try of the season.

He put in a number of fine performances in the 2018 season, but unfortunately picked up an injury in the Leinster game that saw him side-lined for two months. Simpson made his comeback at Sixways against Worcester in April and went on to have a strong finish to the season.

In February 2019, he signed a deal with Gloucester Rugby for the 2019/20 season. The former England international made nine appearances for Gloucester Rugby to date, and has scored an incredible eight tries in those matches as he signed a contract extension in December 2019.

Ahead of the 2021/22 season, Simpson joined Saracens on a one-month loan.