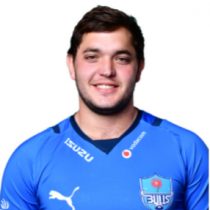 Schooled at the renowned Paul Roos Gymnasium in Stellenbosch, Jan Uys is another in a long line of powerful second rowers to have come through the ranks in South Africa.

2014 saw Uys feature in the Varsity Cup where he played in the first five matches of the season for UCT Ikey Tigers' 2014 Varsity Cup, which UCT went on to win.

In 2015, Uys moved from the Western Cape to the Eastern Cape, joining Port Elizabeth-based side the Eastern Province Kings for the 2015 season. He made eleven appearances for the Under-21 team during the 2015 Under-21 Provincial Championship Group A and also captained the side on occasion.

A year later, Uys was off to France as he joined TOP14 outfit Pau on a six-month loan deal for the 2015–16 season. The move proved to be a fruitful one for the second rower as he was signed on a permanent basis by fellow TOP14 side Brive for the 2016–17 season.

Impressed with Brive despite the club jumping between the TOP14 and PROD2. After five years in France, Uys signed a deal with the Bulls in 2020 which will see him return to South Africa.