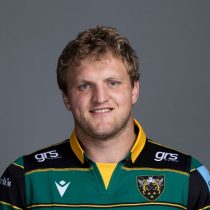 Born in London, Gibson attended Marlborough College and began his professional rugby career at London Irish in 2009. A member of the back row, Gibson spent three years at London Irish and has also represented England at both Under 18 and Under 20 level. In the summer of 2013, it was announced that Gibson would leave Irish and link up with the Leicester Tigers.

Jamie attended Marlborough College in Wiltshire before studying Classics at University College Oxford – where injuries twice prevented him from playing in the annual Varsity match.

Prior to his call up to the full England squad in 2012, Gibson had won the Grand Slam with England Under-18s in 2008 before representing England at Under-20s level at the 2010 Junior World Championship.

He spent five seasons playing at the Berkshire club before moving to Leicester Tigers in 2013, where he became a regular in the side almost immediately.

Jamie made an immediate impression when he joined the Saints in 2015, with strong performances seeing him win the Saints’ Player of the Month award for October 2015. In 2015/16 he played a total of 1435 minutes of Premiership rugby, third only to Luther Burrell and Ben Foden.

Prior to his call up to the full England squad in 2012, he had won the Grand Slam with England Under-18s in 2008 before representing England at Under-20 level at the 2010 Junior World Championship.

The 2017/18 season saw him voted Saints Supporters Club Player of the Season and named in the BT Sport Dream Team at the Premiership Rugby awards for his fine efforts during the campaign, having made more turnovers than any other player during the season.

After racking up 116 appearances and ten tries for the Saints, Gibson signed a new contract to remain at Franklin’s Gardens in May 2019. In June 2020, it was confirmed that he would leave the Saints at the end of his contract following 125 appearances in the Black, Green and Gold.

In November 2020, he signed with Gloucester. He joins his new club with over 180 Premiership appearances under his belt having come through the ranks at London Irish, and going on to represent Leicester Tigers before his move to Saints.

A Premiership veteran, Gibson left Gloucester at the end of the 2020/21 season.