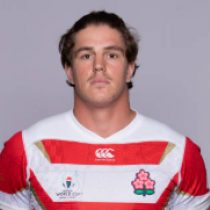 Moore made the move to Melbourne in 2013 to play in the Queensland Reds' U20s outfit.

He then returned to his home state to play for Easts Tigers for two years and was part of the ladder leading side that dominated the Premier Rugby competition for the majority of the 2015 season.

His form earned him selection in the Brisbane City side and the opportunity to line up alongside Adam Korczyk.

2017 saw him sign up for Japanese Top League side Toshiba Brave Lupus and later on make his Sunwolves debut in Super Ruugby.

Following a few good seasons he was drafted into the Japan wider squad and finally selected in the 2019 Pacific Nations Cup squad where he made his debut.

He was named in Japan's 31-man RWC squad and has represented the side 7 times as they head into the quarter finals of the tournament.