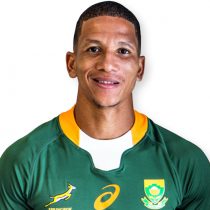 Born in Humansdorp, Libbok attended HTS Daniël Pienaar in Uitenhage, and earned his first provincial selection in 2013, representing Eastern Province at the Under-16 Grant Khomo Week, scoring tries in matches against the Blue Bulls and the Golden Lions.

A talented a versatile playmaker Immanuel 'Manie' Libbok showed early promise and went onto represent SWD at the u18 Craven Week for two consecutive years and was named in the SA Schools squad for 2015. At the conclusion of the tournament, Libbok was included in a South Africa Schools team that played in the 2015 Under-18 International Series on home soil against their counterparts from Wales, France and England.

After high school, Libbok moved to Pretoria to join the Blue Bulls academy. In March 2016, he was included in a South Africa Under-20 training squad, and made the cut to be named in a reduced provisional squad a week later. He also earned a place in the Bulls Currie Cup qualifying squad and represented the u19 squad.

He made the final u20 Springbok squad that same year and made his senior Currie Cup debut in October 2016 and also featured for Tuks during the 2017 Varsity Cup and earned a spot in the u20s squad for the 2017 Junior World Championship in Georgia. Libbok starred for the Bulls during the 2017 Currie Cup and was named in the Bulls squad for the 2018 Super Rugby squad. He will provide the Bulls with plenty of versatility with his ability to play inside centre, flyhalf, wing and fullback.

He made his debut during the 2018 season and made a further 7 appearances for the side. By July 2020, Libbok had 23 Super Rugby caps for the Bulls before joining the Sharks.