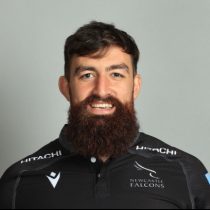 A former Scotland U20 international who played previously for Gala RFC and Carlisle RFC, Gary is the son of Newcastle Falcons' title-winning prop and Scotland international George Graham.

Stirling-born flanker made 40 appearances for Jersey Reds in the Championship during his two-and-a-half seasons on the Channel Island.

In his final season with Jersey, Graham helped them reach the final of the British & Irish Cup.

Gary joined Newcastle Falcons in the summer of 2017, the 6 foot 2 forward was named in Eddie Jones' training squad at the end of the 2017 season, after just four games for Newcastle.

Having been involved in the England setup for the first time earlier in January 2018 in Brighton, Graham became one of 8 uncapped players included in Eddie Jones' 35-man squad for the 2018 Six Nations opener against Italy.

Graham didn't feature for England during the Six Nations having qualified to represent England through residency.

The loose-forward entered the 2018/2019 Champions Cup having made 6 European Cups appearances scoring 2 tries.

In November 2018, he was called into the Scotland senior squad ahead of their clash with South Africa. He was not used in November but was again selected ahead of the 2019 6 Nations

After scoring 12 tries in his 57 appearances for the Falcons, he signed a new deal with the club in January 2020.