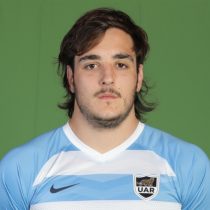 Franco Molina is powerful second rower who made his mark on the Argentina u20 side during the 2016 & 2017 U20 World Rugby Championship.

His performances with the side led to a call-up to the Argentina XV side that competed in the America's Rugby Championship between 2016 & 2018.

In August 2018 he was one of the few players not in the Jaguares squad that was named in the senior national side for the 2018 Rugby Championship, where he will look to make his test debut.