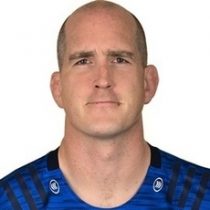 At close to 7 foot tall, Devin Toner is one of the tallest players in Europe. Due to his size, Toner may be pigeon holed as a limited player, used only for lineouts, but this description doesn’t do the Meath man justice as he is a good ball carrier and defender as well as a competent line out jumper.

After impressive Leinster form, he made his international debut against Samoa in November 2010. Toner began to nail down a place in the Irish team in the 2013 season, forming a dynamic partnership with Paul O'Connell in Ireland second row.

Having starred in Ireland's triumphant Six Nations campaign in 2015, Toner was selected in Ireland's 31-man squad for the Rugby World Cup. Played 4 games at 2015 RWC making three starts including the quarter-final defeat to the Pumas.

Toner won his 40th Ireland cap in the historic victory against New Zealand in Chicago. He continued his form into the Autumn Internationals and 6 Nations.

He has grown to become one of the most consistent locks in world rugby and firmly established within the team.

As of November 2019, Toner has made 236 appearances for Leinster and has scored 20 points.

He went into the 2019 Champions Cup with 71 appearances in the tournament.

Toner was named in Ireland's squad for the 2020 Six Nations with 67 caps.