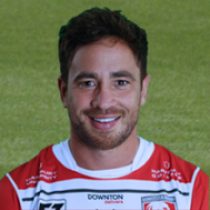 Danny Cipriani joined Gloucester Rugby from Wasps ahead of the 2018-19 season. He has played for the Melbourne Rebels, Sale Sharks, Wasps, and the England national team. Since starting in the Wasps academy in 2003, Cipriani has been capped for England 16 times.

Cipriani joined Wasps Academy in 2003[3] and made his debut against Bristol aged 17 in December 2004 in the Powergen Cup. He played his last home match for London Wasps on 1 May 2010 against Cardiff Blues in the Amlin Challenge Cup semi-final. Cipriani was the first England international player to join an Australian rugby club who was playing in Super Rugby.

Cipriani signed a new three-year contract with Sale Sharks to join them at the beginning of the 2013/14 season. In February 2016 it was announced that Cipriani would rejoin the Wasps for the 2016/17 season and after two seasons with Wasps, Cipriani joined Gloucester Rugby for the 2018/19 season.

In May 2019 he was voted Player of the Year by the Rugby Players Association.

Cipriani hit the ground running in Cherry and White as he was named Gallagher Premiership Player of the Month for September and produced a number of sparkling performances as the season progressed.

In December 2020, he announced that he would leave Gloucester with immediate effects following 128 points scored in 44 appearances for the Club.

In March 2021, Bath announced that Cipriani will join the club in May on an extended one-year contract, to include the completion of the 2020/21 season,.