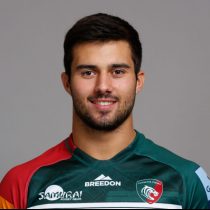 A midfielder capable of playing at inside and outside centre, Dan was born in Manchester and is both Irish and English qualified.

He was a member of the Sale Sharks Academy from 2017-19 before settling at Loughborough and playing in their National League squad alongside Tigers academy graduates Freddie Steward, Jonny Law and Joe Browning.

He made his senior debut for Tigers in the Premiership trip to Gloucester in August 2020 and two further appearances before the end of that season.