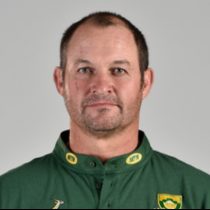 An astute scrummager in his playing days, Daan Human represented the Springboks on four occasions in 2002 having started his career with the Stormers a year prior.

Human played alongside Rassie Erasmus when he was coming through the ranks at the Free State Cheetahs. The loosehead prop subsequently moved to Cape Town and played 26 Super Rugby matches for the Stormers between 2001 and 2004.

The front-rower made the move to France joining Toulouse in 2004 and went on to playing over 160 times for the club winning two Heineken Cup trophies.

Moving into coaching post-retirement, he worked with the Cheetahs forwards and took the Free State head coach reins in the SuperSport Challenge competition and subsequently in the 2017 Currie Cup.

In 2019, he served as a scrum coach at the Cheetahs as well as the Bulls. At that stage, the Cheetahs were competing in the Pro14 and the Bulls in the Super Rugby tournament.

He eventually joined the Bulls on a more permanent basis before replacing Matt Proudfoot as the Springboks' scrum coach in January 2020.