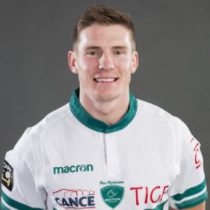 An All Black Rugby World Cup winner, Colin Slade made his first class debut for Canterbury in the 2008 domestic competition and made an immediate impact.

A versatile player who can play first five eight, wing or full back, he also has a strong kicking game both in general play and from the tee.

His debut Super Rugby season was with the Crusaders; after 26 appearances he joined the Highlanders for their 2011 campaign.

After 3 years with the Highlanders, Slade returned to the Crusaders for the 2014 campaign, where they finished runners up to Waratahs. Slade was called into the All Black's 2014 Rugby Championship squad after Dan Carter was ruled out and remained a part of the 2015 set up in the all important World Cup year.

In April 2015, Slade announced that he will join Pau in France for the 2015-16 season to play under former All Black Simon Mannix. He played 21 test for the All Blacks, including two world cups.

In March 2017, Slade extended his stay with the French club for a further three seasons after originally leaving New Zealand after the 2015 Rugby World Cup.