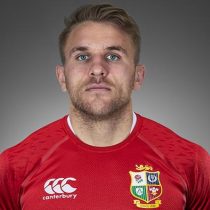 Chris Harris is best known for his defensive aptitude as well as being an abrasive attacking outside centre.

He was dual registered with Tynedale RFC in National League 1 and also had a loan spell with Rotherham in the Championship. He completed his degree in 2013 and a year later made his mark in the Premiership 7s competition, with a try in each of Newcastle’s three group games.

Harris made his Premiership debut in December 2014 and scored two tries against Saracens and a series of consistent performances saw him earn a first Scotland call-up in 2017. He made his debut off the bench against Samoa and then his Six Nations debut against Wales a year later.

He joined Gloucester Rugby for the start of the 2019/20 season. 2019 was a big year for Harris, who played in all four games for Scotland at the World Cup and moved to current club Gloucester.

Since making his Scotland debut in 2017, Harris has accumulated 28 caps and become a key figure in the heart of their midfield.

An athletic and intelligent centre, Harris has thrived under Scotland head coach Gregor Townsend and defence coach Steve Tandy in the last 18 months

He has gone from strength to strength since, playing in all nine of Scotland’s matches in 2020 and all five in 2021 to date, including the 11-6 win away to England in February and the 27-23 win in Paris in March.

Chris Harris is rewarded for an excellent season with a maiden British & Irish Lions call-up in 2021.

He made his Lions debut in the opening game of the 2021 Tour in South Africa against the local Lions. He scored a try against the Sharks and featured against South Africa before the test series.