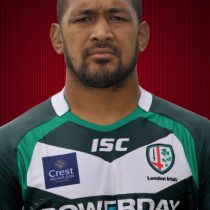 Hailing from Tonga, Hala'ufia is a hugely physical back row forward with a huge appetite for ball carrying. Predominantly a blindside or number 8, the giant Tongan began his professional career in Italy with Gran Palma. After just a year in Italy, Hala'ufia moved to England and linked up with Rotherham Titans. In 2006 he joined Harlequins before making the move across London to London Irish. Halau'fia has also represented Tonga on over 20 occasions.. Hala’ufia joined the Scarlets in the summer ahead of the 2014/15 season from London Irish, where he’d spent the previous six seasons. He signed for London Welsh in November 2014
R.E Nov 14