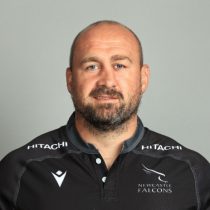 Liverpudlian Fearns is a powerful ball-carrying back-row forward who is comfortable at both 8 and on the openside.

Having graduated from St.Mary's College and Crosby Sedbergh School, Fearns began his professional career with Sale Sharks in 2008.

Three years later, Fearns moved onto Bath where he became an integral member of their pack.

In July 2013, Fearns was involved in a rather controversial incident with Gavin Henson when he allegedly punched his new teammate in a late-night altercation.

The former Sale Sharks and Bath forward joined Lyon in 2015 and helped Lyon return to the French top-flight by winning promotion. Selected three times between December 2015 - January 2016 in Midi Olympique‘s XV of the Week, Fearns left Bath for Lyon after 73 appearances and earning a reputation for an uncompromising style of play in both attack and defence.

On 14 November 2016, Fearns returned to England to sign for Premiership side Gloucester Rugby on a three-year contract from the 2017-18 season.

A change of mind saw Fearns stay at Lyon as Gloucester confirmed that Fearns would continue to ply his trade in the Top 14 with Lyon, despite putting pen to paper on a three-year contract to join Gloucester Rugby.

The French side made concerted efforts in to persuade Fearns to stay, offering him significantly increased personal terms.

Fearns has made well over 50 appearances for Lyon and took his cap tally to 30 by the end of the 2018/19 Champions Cup.

In May 2020, Fearns confirmed he had signed a two-season deal with Pro D2 side Rouen.

In April 2021, he joined Premiership side Newcastle Falcons until the end of the 2022-23 season.