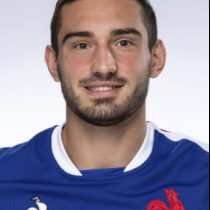 The French have a knack of producing incredibly talented scrum-halves and Lyon academy graduate Baptiste Couilloud is no different.

The fiery scrum half made the France U20 Six Nations squad in 2016 featuring mostly off the bench for Antoine Dupont but become a starter for the side as they claimed the u20 World Championship title for the first time in 2018.

Three tries in the domestic league during the 2016/17 season highlighted how dangerous he can be with the try line in sight.

Couilloud was called up to the France Six Nations squad in 2018 making his debut off the bench against Italy at the age of 21.

He featured two more times from the bench but didn't get another look into the squad that went to the Rugby World Cup in Japan.

The all-round talented scrumhalf had 8 Challange Cup caps heading into Lyon's first Champions Cup campaign during the 2018/19 season but was unable to add to his European cap tally due to injury.

2019 could be a big year for the talented youngster who is part of Lyon and France's new 'golden generation'.