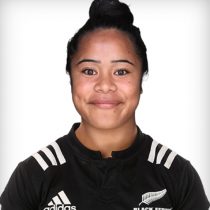 A try-scoring machine at club rugby, Ayesha Leti-I'iga was rewarded for her 2018 Farah Palmer Cup form and is now considered as one of the competition’s top wingers.

Having made her debut for the Wellington Pride at just 16 years of age, Leti-I’iga is now a mainstay in a side that is pushing for promotion back into the Farah Palmer Cup Premiership.

Leti-I’iga joined four other Wellington Pride teammates in the 28 strong end of season tour squad in 2018. A former school-aged sprinter, Leti-I’iga brings a balance of strength, speed and an ability to find the tryline.

During the 2017 and 2018 club rugby seasons the young winger has amassed over 50 tries for her Wellington club team Oriental Rongotai.

In 2018, her form was rewarded making her test debut against USA.