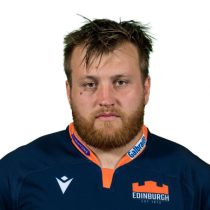 Williams originally moved to Edinburgh to play for FOSROC Super6 side Watsonians.

Born and raised in the coastal town of Whitianga in New Zealand’s North Island, Williams attended St Paul’s Collegiate School in Hamilton for his final year, before he studied for two Bachelor’s degrees – in both Physical Education, Exercise and Sports Science, and Science (nutrition) – at Otago University.

During that time, the tighthead played over 100 games for the University’s rugby club, helping them to three Otago Metropolitan Premier Club Rugby titles and gaining recognition with New Zealand Universities.

Williams made his Edinburgh Rugby debut from the bench in the away victory over Connacht in March 2021, and after eight appearances for the capital, he signed a new deal ahead of the 2022/23 season.