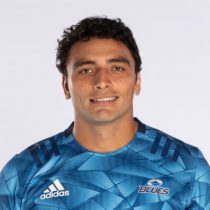 Born and raised in Auckland, Alex Hodgman travelled south to begin his professional career, making his debut for Canterbury in 2014.

The front rower went on to win three Mitre 10 Cup titles with Canterbury and notched up nine Super Rugby caps for the Crusaders before returning home to Auckland.

In June 2016, Hodgman was announced to have signed with the Blues for the 2017 season.

A Fijian & New Zealand u20 representative, Hodgman took his Super Rugby cap tally with the Blues to 26 during the 2020 Super Rugby season and added a further 7 more during the Super Rugby Aotearoa season.

His superb form for the Blues saw him earn his maiden call up to the All Blacks squad in 2020.