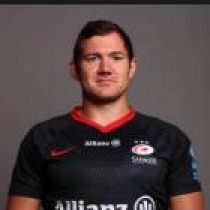 The multi-talented backline ace is able to play at either fullback or flyhalf, but has established himself more as a quality No.15 at Saracens. He was part of the England Under-20 team that won the Six Nations Grand Slam in 2008 in what was a breakthrough season for Goode.

As a youngster Goode also played football for the Ipswich academy, played county tennis and qualified for the National Schools athletics finals. His continued top notch performances for Saracens eventually earned him his first Test cap for England in 2012. Since then, Goode has secured 18 caps to his name for England and has also been named in the English squad ahead of the Rugby World Cup 2015.

After a stellar season for Saracens in 2015/16, Goode was named Premiership Player of the Year as well as helping his side win the Champions Cup. Goode at U19's switched from out-half to full-back in 2009 under Eddie Jones' tutelage, who was the director of rugby at Saracens at the time. A transition that would set him on a path to establishing himself as a central figure in Saracens’ all-conquering side and winning 20 caps for his country.

His consistency in delivering outstanding performances for Saracens has seen the team win 3 Premiership titles and back-to-back Champions Cup titles in an extremely successful period for the club.

Over time Goode has become a fan favourite at Allianz Park and has become well known for some of his post-match antics including wearing his full playing kit when the side celebrate big victories.

Goode has racked up over 230 appearances for Saracens over the last decade with the side.

Goode took his appearance tally in the Champions Cup over 70 during the 2018/19 season helping Saracens win their third title in four years. His form in the tournament saw him being named as the European Player of the Year.

In August 2020 he announced a contract extension at Saracens keeping him there until 2023 and agreed a load deal with Japanese side NEC Green Rockets. He joins the Top League side at the end of the 2019/20 season