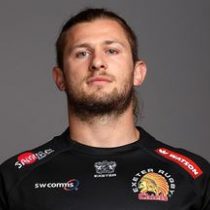 Growing up in Perth, Hepburn qualifies for England through his father and he previously attended school at Ravensthorpe District High in Western Australia.

He took up the game of rugby Gillotts School in Henley-on-Thames and went on to play for Oxfordshire U17.

Hepburn started out his career with Henley Hawks before joining the Wasps Academy and later spent a year in the Championship with London Welsh.

Recruited by Exeter Chiefs for the 2014/15 season, Hepburn had played for Australian club Perth Spirit after helping England U20 to complete the stunning 2013 Six Nations and IRB Junior World Championship double.

He appeared in 15 matches for the U20's including all ten in two successive World Championships. His dynamic work around the field, coupled with a solid approach to the fine arts of the front-row, won him many admirers from the outset.

His displays during the course of the 2015/16 season put him on the radar of England - and it came as no surprise when he was selected as part of the Saxons squad to tour South Africa that summer.

In July 2016, Alec became one of three Saxons players to sign a deal with Chiefs, committing his three-year future with the Premiership club.

After picking up a series of niggling injuries, Hepburn soon recovered was a key figure in helping Chiefs to reach the 2016 Premiership final.

In January 2018, Hepburn became one of 8 uncapped players to be included in England's squad for the 2018 Six Nations opener against Italy.