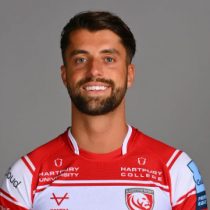 Hastings, a product of George Watson’s College and Millfield School, has risen through the Scotland age-grade ranks, gaining caps at under-16, under-18 and under-19.

The stand-off, who won two Scottish Schools Cup titles with George Watson’s, has played with Premiership side Bath.

In April 2017, Hastings announced that he would join Pro12 Glasgow Warriors on a two-year deal subject to a medical.

The son of former Scotland captain Gavin, Hastings was at the Recreation Ground since 2014.

After an impressive run of form in his debut season with Glasgow, he earned his first call up to the senior test squad ahead of Scotland's final Six Nations clash with Italy.

He signed a new two-year contract with Glasgow Warriors in December 2018, committing to the Scotsotun club until at least 2021.

On 9 October 2019 Hastings scored two tries and kicked eight conversions in a 61-0 win over Russia at the 2019 Rugby World Cup.

He was named in Gregor Townsend's 38 man Scotland squad for the 2020 Six Nations Championship. He started against Ireland, England, Italy and France and being set to start against Wales before the 2019–20 coronavirus pandemic prevented that match from going ahead.