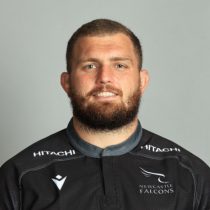 Brocklebank is an English prop who started playing rugby at the late age of 16, when starting his studies at Durham University, he was spotted and signed to Falcons academy side.

He played for England Counties and England Students, while completing his studies, and represented his University team as well as Falcons Academy.

As of the 2018/2019 Champions Cup, Brocklebank has had 2 European Cups appearances.

After making 74 appearances for the Kingston Park club, he signed a new two-year deal with the Falcons.