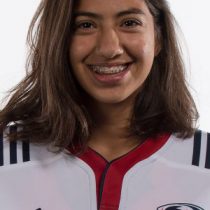 Pedraza started her rugby career at age 16, and earned recognition for her play at Fullerton High School following her family's move her senior year.

Though she was not selected to the AIG Women's Collegiate All-Americans in Salt Lake City in 2016, attending the greater All-American camp prior to it being pared down for selections against Canada's Maple Leafs developmental squad, she was invited to the under-20 portion of the winter National All-Star Competition.

Pedraza's performances there earned her a call-up to the senior assembly and, in time, selection to the Can-Am Series assembly. She made her international debut as a substitute against Canada Tuesday, March 28, at scrum half, and her first international start four days later.

By June 2019, she had added another test cap to her name.