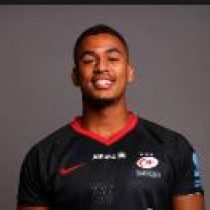 The Scotland age-grade youngster had spent the summer of 2018 in Wellington, New Zealand learning from the likes of All Black legend Rodney So’oialo before returning to north London.

He earned a first senior appearance for the Men in Black in the Premiership Rugby Cup against Sale Sharks and featured heavily in Storm’s successful Shield season.

Christie was selected by England Under-20s against the Junior Springboks in April 2019 before coming off the bench for Saracens at Worcester Warriors a month later.

Christie made his senior debut in the 2018/19 Premiership Rugby Cup having spent the summer of 2018 in Wellington, New Zealand, learning from All Black legend Rodney So’aialo.

In total, Christie has featured 10 times for Saracens, including once in the Heineken Champions Cup before signing on until 2022 with Saracens in July 2020.