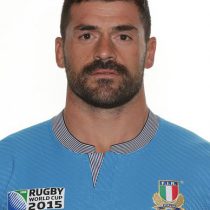 The utility back has changed position throughout the back line numerous times over his career. Recognised as a promising player at an early age, he made his first cap for L’Aquila at 16. He made his debut for Italy at the age of 18 against Spain. Although he became a regular he did not make his Six Nations debut until 2003.

He joined Viadana in 2003, moved to Biarritz in 2006, then onto Racing Metro in 2009 followed by a season at Aironi. In 2012 he then moved to London Wasps. He was named the 2011 Six Nations player of the championship, and since has been an ever present in the Italian national set up. In 2015 he was named in the 31 man squad for the Rugby World Cup.

Due to an injury sustained in the 2015 World Cup, Masi was medically advised to retire in June 2016.

2011 Six Nations Player of the Championship