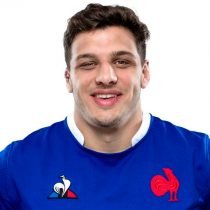 Born in Haute-Marne, Fischer was a talented athlete from a young age showing early promise in swimming, athletics and football.

Fischer turned to rugby at the age of 11 after watching a Clermont-Montpellier game. He began playing rugby at US Issoire before joining the ASM Clermont Auvergne training centre.

He quickly became known for his work ethic and hard tackling on defence, Fischer trained with the France u20s but never represented the side.

He progressed through the Clermont Academy in 2018 as they looked for competition for John Hardie.

He impressed the coaching staff and earned his debut against Agen in the opening game of the 2018/19 season.

Fischer continued to impress during the 2018/19 season before an injury against Toulouse ended his season.

He is often compared to Michael Hooper with his tireless defence and work at the breakdown, he looked to make a similar impact at test level for France after he continued to his fine form for Clermont earning a call up to the France squad for the 2020 Six Nations.