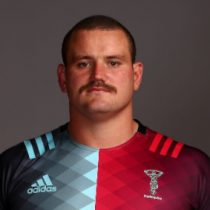 Louw was included in the South Africa Under-20 squad that participated in the 2014 IRB Junior World Championship in New Zealand.

He returned to domestic action later that year, making five starts for the Blue Bulls U21s during the Under-21 Provincial Championship and scoring a try.

Louw was named in the Stormers wider training group, and was included in their final squad for the 2015 season.

His outstanding 2017 Super Rugby season lead to a South Africa A call up to face the French Barbarians.

In October Louw made his test debut off the bench against New Zealand in Cape Town and earned his first test start against France in November.

He continued to perform during the 2018 Super Rugby season and was named in the Springbok squad for the June Internationals.

In August 2019, he was called into the Springboks squad ahead of their International Friendly clash against Argentina.

The 13 time Springbok finished the Currie Cup season with Western Province and signed a short term deal with Toulon for the Rugby World Cup.

In 2020, Louw signed a deal to join Premiership club Harlequins.