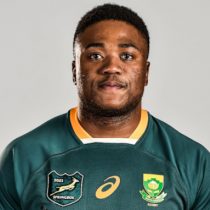 Simelane picked up a rugby ball at 11 but only focused on the sport later on after competing at athletics, excelling in the 100m

After catching the eye at Jeppe High School he represented SA Schools and the Lions Craven Week side. In his 2 years of 1st team rugby at Jeppe, he not only impressed with speed and skills but off the kicking tee too boasting a kick percentage of over 80%.

He signed a 2-year deal with the Lions after leaving school and in 2017 made his Varsity Cup debut for Wits.

Simelane had a successful 2019 Currie Cup, where he started every game for the Lions on the way to the final.

After fighting his way back into contention and earning his first start of the year during the Lions’ tour of Australia, Simelane’s season took a double-blow as he picked up a minor knee ligament injury before Super Rugby was halted by the Covid-19 pandemic and South Africa went into a hard lockdown.

Simelane’s hard work clearly paid off as he returned to his best form in Super Rugby Unlocked.

In his first start of the campaign, against Griquas, Simelane not only scored a fantastic try when he got the ball on the wing, chipped ahead and outsprinted the cover defence, but also made four try assists, becoming just the second South African to achieve the feat after SP Marais in 2017.

Despite making just two starts in Super Rugby Unlocked, Simelane made a massive 158m, beat 10 defenders and made seven linebreaks.