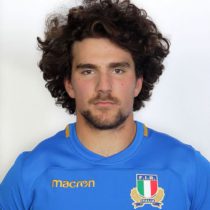 Born in Mestre, Venice and raised in one of Italy’s most rugby-oriented regions, he made the switch to Zebre in 2015 after impressing with Rugby Mogliano and the Emerging Italy side.

One of the first athletes developed through the expanded FIR Academies system, he has represented Italy in every age-grade team, winning a Junior World Trophy in Chile in 2013.

One year later he was crowned Eccellenza Champion with Mogliano before moving to Zebre at the beginning of the 2015/16 season.

In just two seasons, the Zebre centre became one of the most improved players on the roster as he built on a positive debut campaign in the PRO12.

His international debut came under Conor O’Shea when he made the starting XV against Argentina in the first match of the Americas mid-season tour in Santa Fe, pairing with Campagnaro in midfield.

He was again involved in the November Test window, scoring the only Italian try against the All Blacks in a packed Stadio Olimpico in Rome before being named on the bench in the historic first ever win against Springboks in Florence.

Gifted with good acceleration and some excellent pace, at 100Kg, he is a powerful runner and hard to stop in the red zone area, that can play either outside or inside centre.