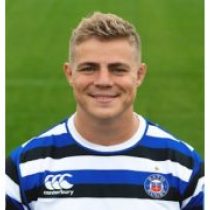 Ellis is an Old Millfieldian who joined the Senior Academy in 2013/14.

He was a member of the England U18s squad which was crowned champions of Europe in March 2013. He followed this up in 2014 as a member of England U20s Junior World Cup Championship-winning squad.

In 2014/15, an injury crisis at the Club saw Ellis and Charlie Ewels promoted to first team action against Glasgow Warriors in the Champions Cup – both players’ senior debuts.

Ellis switched to the back row in the summer of 2016 and he hasn't looked back since. His performances throughout the 2016-17 season earned him a call-up to the England squad to face the Barbarians, but unfortunately, a knee injury ruled him out of making his international debut.

The back-rower then ran out for England at the end of the 2018/19 season, helping his country to a 51-43 victory over a star-studded Barbarians at Twickenham.